Toy Karma – The Art and Toys of Mark Nagata 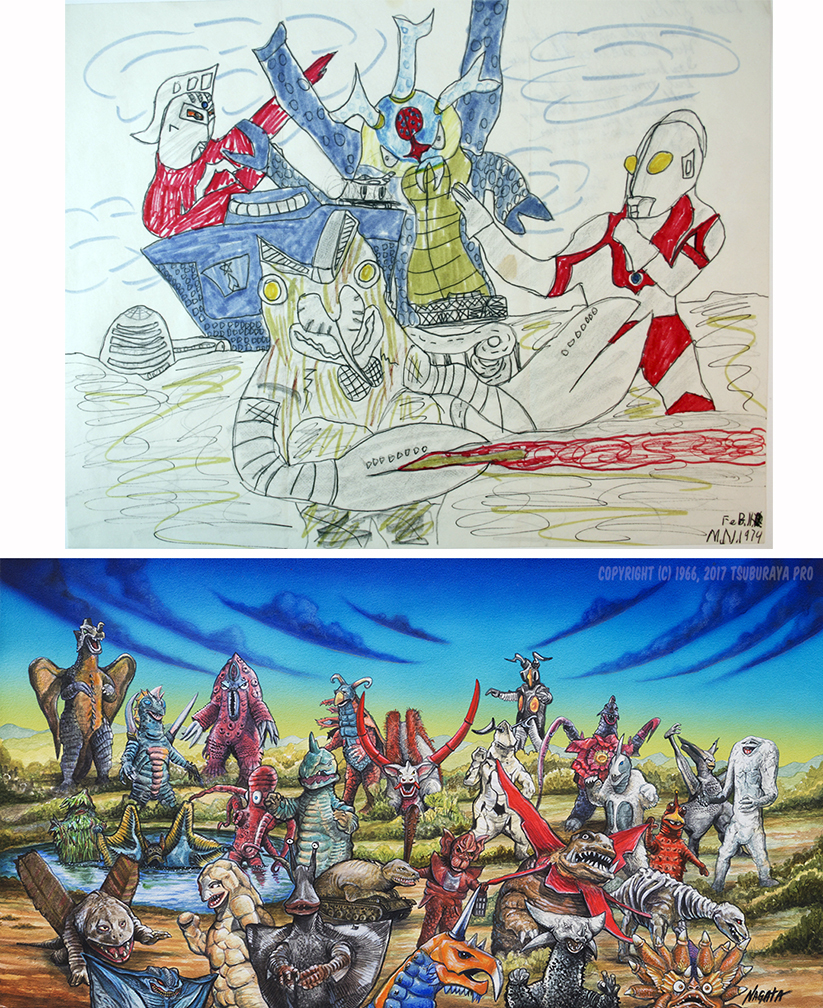 My memories of early childhood mostly start around the time when we lived in West Los Angeles during the early 1970s. My father was a bank manager for Bank of Tokyo in the Crenshaw area. My mother was a stay at home mom and to say she had her hands full with me is an understatement. I think a must have broke at least a half dozen of her glass vases in a years time. But, in between getting in trouble for knocking stuff over, she instilled in me a love of art and drawing.

Christmas of 1973, my toy world would change forever and unbeknownst to me, affect the rest of my life.

For reasons lost to time, my Auntie Joanne ( my father’s sister ), who was stationed in Tokyo with her family and husband on a American military base, sent a huge box of toys to me for Chirstmas. As I opened each item, I really could not make sense of what I held in my hands. Strange colorful creatures, outer spacemen, see thru robots ! My mind was blown !

I guess it’s no surprise that I became a illustrator, painting children’s horror book covers for “Give Yourself Goosebumps” and many others for 13 years. A founder and magazine publisher of Super7 Japanese toy magazine and finally owner of Max Toy Company !

Max Toy Company is really an extension of all my loves, Art, Toys, Heroes and Kaiju monsters ! 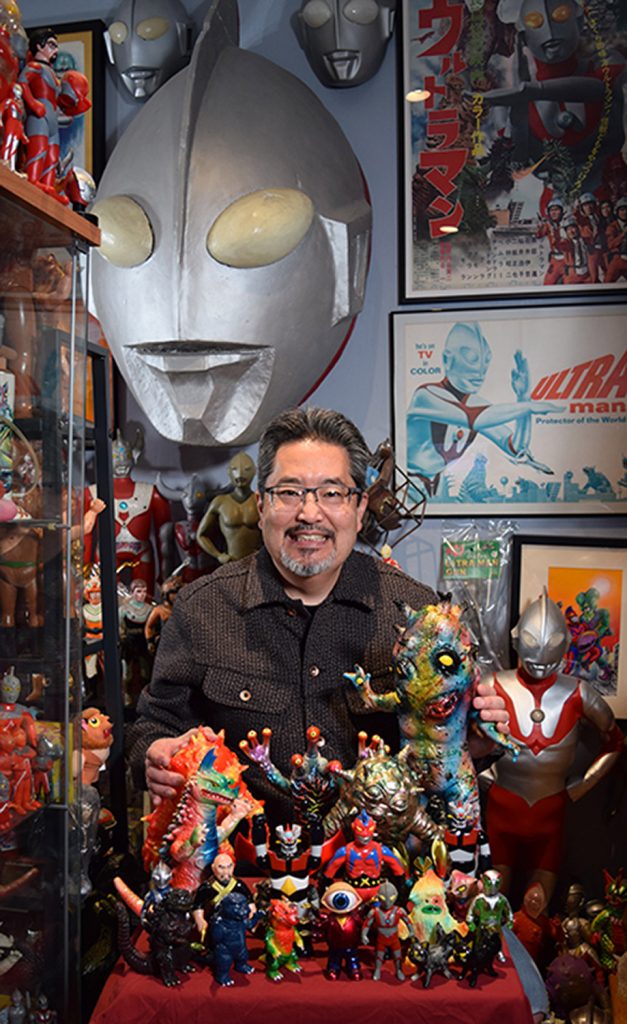 In September 2018, Mark’s Japanese toy collection and Art was on display at the Japanese American National Museum in Los Angeles as part of the “Kaiju vs Heroes – Mark Nagata’s Journey through the World of Japanese Toys exhibit. Even actor/activist George Takei gave an opening speech and talked about one of his first roles as a voice actor in the American version of the film Rodan ! 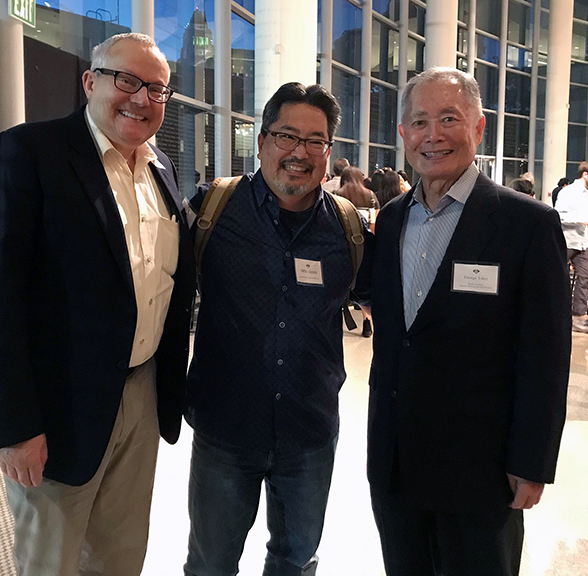 Even actor/activist George Takei gave an opening speech and talked about one of his first roles as a voice actor in the American version of the film Rodan ! 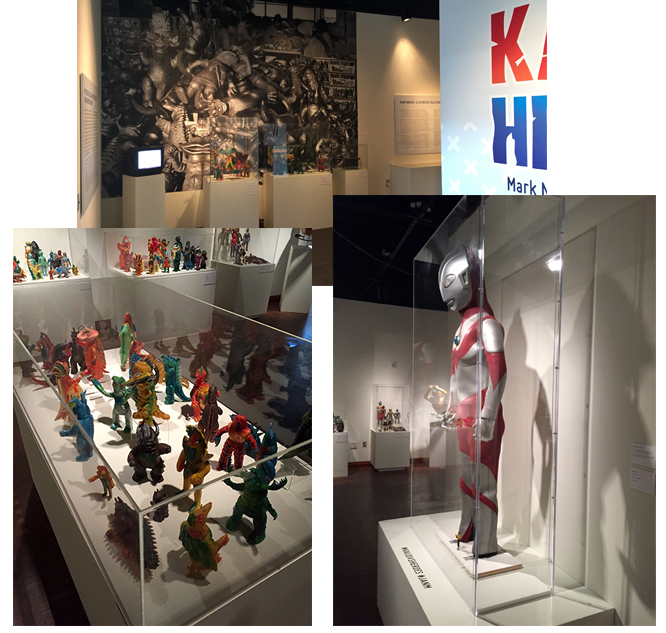 Over 300 toys and pices of art from the Nagata Collection on display.

We only spent a day and a half at #dcon2022 but what a fantastic time we had with wonderful friends 🎉 Toy Karma has brought us all together from around the world and for that I’m most grateful. While I crawl back into my toy cave I think 2023 you’ll see me a tiny bit more if plans work out 😄 #maxtoy #maxtoyco #kaiju #monsters #marknagata #arttoys ...

One of the best parts of this past #dcon was being able to have my son, @maxnagataart sell his customs & work the booth ! I tend to get sidetracked talking to folks so having my family take care of the other stuff helps (!) Anyways super proud of Max and I even heard one person say they liked his paint work better than mine 😄 The padowan is now the master ! #maxtoy #maxtoyco #kaiju #monster #designercon2022 #maxnagata ...

After 2.5 years of not doing any in person shows we weren’t sure what to expect for this years Designer Con.
My main takeaway was it was good to actually interact with people again (!) Thank you SO much to the folks who came up to me to say that I influenced them to start on their paint or collecting journeys ! I work in a bubble so I don’t really think about what I’m posting or producing is having any effect out there (!) I’m sorry I didn’t get pics with everyone but here’s a few. I will post toys to www.maxtoyco.com in the next few days 🎉 #maxtoy #maxtoyco #kaiju #monsters #designercon2022 ...

@designercon Thank you 🙏 everyone who stopped by the Max Toy booth ! Had a very successful show 🎉 If I had to sum up this year I guess I would say surreal ? Has it been 2.5 years ?! I think I’ve blocked out those tragic years… anyways here’s a quick montage of Friday I’ll post more later…
#maxtoy #maxtoyco #kaiju #dcon2022 #monster ...

Had a fantastic @designercon preview night & will post more pics but honestly getting a pic with @sarahandersencomics made my year 🎉🐈‍⬛ #maxtoy #maxtoyco #cats #blackcats #sarahscribbles ...

Sofubi-man with casting station set #dcon exclusive paints by #marknagata with 3D printed casting station! Did you know that in 50s & 60s both men & women worked in the soft vinyl Japan industry. Both pulling vinyl & painting the figures. sculpted by the talented @cristina_ravenna 3D printing clean up by @javierjimenezxl #maxtoy #maxtoyco #sofubi #kaiju ...

Sofubi-woman #dcon exclusive, cast in bronze like color vinyl with glitter 🎉 Did you know that in 50s & 60s both men & women worked in the soft vinyl Japan industry. Both pulling vinyl & painting the figures. When developing the concept I decided to show her airbrushing an Eyezon Kaiju 🎉 Figure digitally sculpted by the amazing @tostadaunicorn Andrea Calleja, 3D printing clean up by @javierjimenezxl #maxtoy #maxtoyco #arttoy #sofubiman #kaiju ...

Once again happy to customize a Mermaid from @martinhsuart ! Using apoxie sculpt for a custom base… little mermaid like 😬🧜‍♀️ Visit Martin at his @designercon booth 2124 ! #marknagata #custom #arttoy #mermaid #martinhsuart #dcon2022 ...

Once again honored to be invited to play with @mrscotttolleson & @brokepiggy Shard at this years @designercon ! Booth 218 ! #marknagata Apocalyptic Shards 😬 Swipe for full views, each gets a custom base ! #shard #scotttolleson #arttoy #custompainted #rainbow #monster ...

Backing card for the new Alien Xam figure ( see previous post !) I seldom get time to paint but managed to do this one 😅 Original will be for sale at #dcon Max Toy booth #630 ! Next to the mighty @sunguts & the awesome @monsterpatroltoys & famous @marusan_kaminaga 🎉 #maxtoy #maxtoyco #marknagata #kaiju #monster ...

The “Toy Gods” were in my favor & today I received the first #sofubi Alien Xam , sculpted by the Legendary @artist_paul_komoda ! A @designercon exclusive Max Toy booth 630 🎉 12.5 inches tall and swipe for Paul’s original sculpt so you can see the details 👏 To say I’m thrilled is a understatement this is a thing of beauty ! #maxtoy #maxtoyco #kaiju #alien #monster #toykarma ...