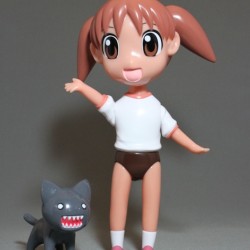 Chiyo Mihama (美浜 ちよ Mihama Chiyo?), usually called Chiyo-chan, is a child prodigy, having skipped five grades to 10th grade (the first year of high school in Japan) at the start of the series, yet she is still at the top of the class. Such grade-skipping would be unthinkable in Japan, and the series humorously explores its potential consequences. The other characters find Chiyo amazingly cute, but sometimes take advantage of both her youthfulness and her scholastic abilities. However, it seems her classmates are mostly nice to her, with the exception of Tomo, who seems to enjoy teasing her. Her diminutive stature leads to her having a lack of confidence, particularly in sports where she fears she is a burden to others. Chiyo is frequently viewed with jealousy by fellow students, initially because of her intelligence, but later also because of the discovery that her family is exceedingly wealthy (they own an enormous mansion and a summer house, which Chiyo invites her classmates to visit on several occasions). The stylistic rendering of Chiyo’s pigtails allow for several visual gags in both the manga and anime: Osaka often imagines them to be flapping wings, that they can be detached and replaced, they control her, or even that they are entities independent of Chiyo herself. At home, she can almost always be found in the company of her Great Pyrenees dog, Mr. Tadakichi. Because of her small size, she can even ride on his back as if he were a horse. Of all of the girls, she is the only one who does not sit through college entrance exams, as she intends to study overseas in America. 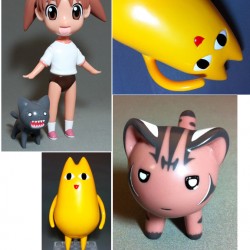