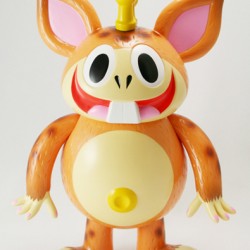 Kaiju Booska (快獣ブースカ Kaijū Būsuka?, translated as Monster Booska) is a famous children’s sitcom, and the first to feature the friendly monster Booska. Produced by Tsuburaya Productions, the show aired on Nippon TV from November 9, 1966 to September 27, 1967, with a total of 47 episodes.

Booska is the name of a cute, friendly human-sized kaiju (monster) that looks like a cross between a bucktoothed teddy bear and a giraffe. It was originally an iguana until its owner fed it experimental food, a similar concept to the cartoon Ned’s Newt. Created by Eiji Tsuburaya, Booska made his debut in the popular 1966 children’s TV series, Monster Booska, produced by Tsuburaya Productions (which had just created Ultraman months earlier).

And just like that 31 years fly by (40 years together) #Kaiju wife is my better half 😍 #nagatacollection #marknagata #maxtoy #maxtoyco #anniversary #holygrail ...

Sorry these have sold out ! But we are ordering more so check back soon ! Also sorry for the awkward performance but you get the idea of how cool this came out 😜 3D sculpt by Andrea Calleja @tostadaunicorn Printing / clean up @javierjimenezxl #marknagata #maxtoy #maxtoyco #sofubiman #kaiju #monster ...

Tomorrow get ready… after several years of yelling at employees over Zoom, Tiger Boss is back in the office and glowing mad 😆 #maxtoy #maxtoyco #cats #meow ...

Paint tip ! You can use PlayDoh or similar to make a mask for spraying ... especially helps with organic shapes like these Trench figures from @madmonk1869 .. coming soon ! #marknagata #nagatacolor #airbrush #seamonster #kaiju #monster ...

Glow in Dark Potato Guts are currently sold out, however I’ll make more as soon as a new shipment arrives 🥔👁 Before #kaiju Eyezon he was a mutated little spud 😂 Fabulous header by @mooncalfe23 & sculpt by @gravesish Painted by #marknagata #maxtoy #maxtoyco #kaiju #monster ...

Some guy named #marknagata is having a solo custom show this weekend 😬 Ok, that’s Me ! Many of you probably don’t even know who I am so I’ll compose a short post for you soon. I’ve worn several hats in my 58 years but the one constant is #toys Anyways here’s a custom Shin Eyezon that will be available soon ! #maxtoy #maxtoyco #sofubi #kaiju #monster #selfpromotion ...